There is a visceral relationship between the city and the new. With the idea of recreating the past in order to build a different present, albeit always with one’s gaze open to trying to discover a future. The past is never a distant place when, through its memories, examples and boldness, it stimulates the new paths offered up by the present.

The Oficina project has that intimate relationship with the desire to make the times – past, present and future – an amalgam of wishes, spaces of seduction, chance encounters, meetings, crossings that may be or become that which may occur at any time.

Oficina does not intend to be just one more restaurant. Appropriating Magritte, one might say that Oficina is not a restaurant. At least in the classic and limited sense of the term. And it is not because, indeed, being a restaurant, it is much more than a restaurant.

The whole concept of Oficina has since the outset been anchored in a solid idea of sharing, of diversity, of discovery, of fusion and even of the appropriation of narratives brought about by multiple approximations to two universes that are apparently so far apart and yet are so close: gastronomy and art.

Buildings take on unusual capacities for transformation. This Oficina space was originally a car repair workshop. The leftovers from that previous time remain, like a canvas being used again by a painter. The traces of identity have not been erased, nor annulled, nor hidden. Rather they have been given greater value by Paulo Lobo, so that they may compose a new aesthetic and architectural discourse.

Coming into Oficina will always be a challenge. Because this is the space aimed at the stating of innovative proposals for contemporary art. Because this will be the space for the consecration of innovative gastronomic proposals, although with deep roots in the tastes and knowledge of traditional Portuguese cuisine.

The art of Oficina will be all the greater with this sort of marriage between the sensorial expression of differentiated artistic and gastronomic approaches.

In the Rua Miguel Bombarda, the city of Oporto street which became known as devoted to art, and in a building that stood out as the first artistic intervention by Pedro Cabrita Reis, new temptations are constantly arising. Some of these are provoked by the astuteness of a gallery owner such as Fernando Santos, and others are celebrated by the magic and sensitivity of Chef Marco Gomes, one of the great names of Portuguese cuisine. 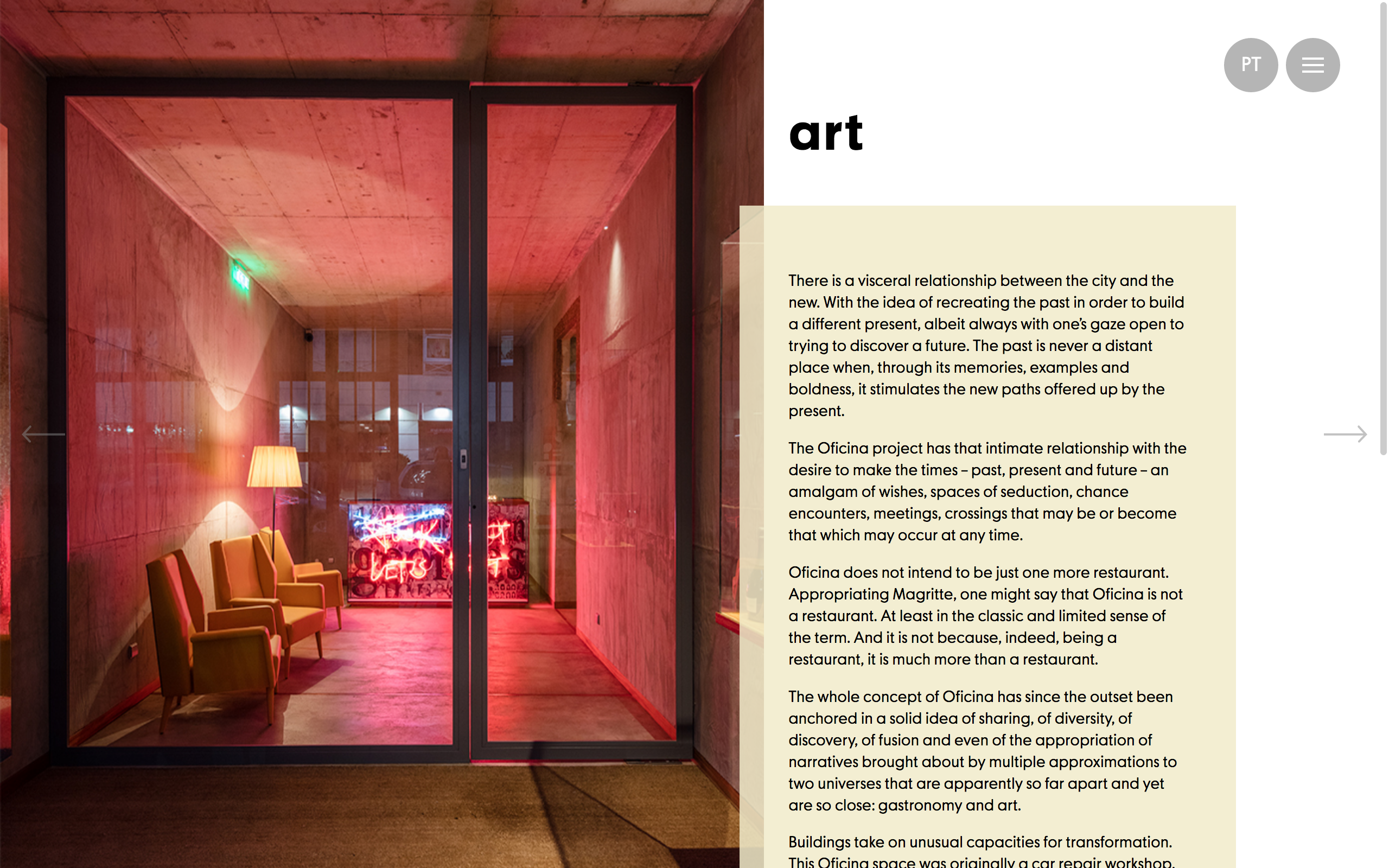